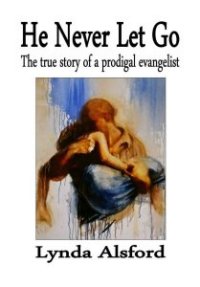 Christian Evangelist Lynda Alsford was preaching a sermon the week before Christmas in 2009. There was a problem though, a big one. She had stopped believing in God!

He Never Let Go is a book of two halves. The first half is the story of her upbringing, conversion and entry into ministry and culminates with her loss of faith and descent into atheism. The second half charts her journey from atheism back to faith, examining why she lost it and her use of reason and faith to reclaim it again.

While the book is neither a theological textbook or an attempt to prove God’s existence or otherwise,  it is nonetheless a nice antidote to today’s prevalent aggressive atheism led by Dawkins et al who proclaim that no reasoning, thinking person could conclude that God exists. Indeed as part of her search for God during her faith crisis, she read Dawkins’ The God Delusion and was at least partly persuaded that God did indeed exist. Not the effect the esteemed professor was hoping for.

I particularly liked the descriptions about a new Christian experiencing church with  its sometimes strange ways, something established Christians can lose sight of. Alsford also conveys well the sense of ‘freedom’ she feels when she no longer has to attend Christian groups after embracing atheism. Also important is how she views God and Christian ministry differently after returning to faith.

Her return to faith is precipitated by an examination of why she lost it in the first place and the process of searching again to decide once more whether God exists. This involves coming to terms with disappointment at not realising her dream of having a family and realisation that her previous beliefs may have depended more on works than faith.

While He Never Let Go is unlikely to persuade any hardened atheists, it’s important to remember that its purpose is autobiographical, simply to relate a life story and leave readers to make their own judgements. It can be a little repetitive in places but is nonetheless a good account of one evangelist’s faith crisis. Readers may also empathise with the sometimes painful honesty conveyed.

Alsford is in the process of writing a follow up book detailing her battle with compulsive over-eating and how God heals her from this.

For Christians (or anyone) struggling with the question of God’s existence, and for more ‘open minded’ atheists, this book has potential to be helpful.

Both the Kindle and paperback versions are available on Amazon.