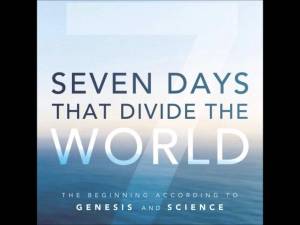 John Lennox is Professor of Mathematics at Oxford University, and as a Christian has debated ‘New Atheists’ Richard Dawkins, the late Christopher Hitchens and others, and travels internationally speaking and lecturing. As a scientist and mathematician he deals in this book with the interpretation of the seven days of Genesis 1:1 to 2:4. This is of course not new and the subject has been tackled many times over the years.

Lennox, in the early chapters of the book is countering the Young Earth Creationist view which has done so much to create the perception of a continuous battle between science and faith. The first two chapters deal with the controversy surrounding the movement of the earth in relation to  the sun and we are reminded that before Copernicus and Galileo there was the belief that the earth was the centre of the universe and the sun and stars moved around the earth. Christians universally from the Pope to Calvin and Luther rejected this new understanding quoting Scripture to prove the stability of the earth and the movement of the sun and stars around it. Lennox reminds us it took 170 years for this controversy to be settled and there is virtually no one today who argues that the sun goes around the earth and a new (non literal) way of interpreting Scripture was found to deal with this. Lennox therefore shows that Christianity can progress where it recognizes the findings of modern science and enhance its credibility in the scientific community.

As a mathematician Lennox is committed to the accepted ‘big bang’ theory of the origin of the universe 13.8 billion years ago. Genesis 1:1 stating, “In the beginning God created the heavens and the earth” is the creation ‘ex nihilo’ of the entire universe including sun, moon, stars. This is not part of the seven days of creation which begin in verse 3, thus allowing for the billions of years needed from the big bang and the enormous size of the observable universe.

In chapter three Lennox deals specifically with the days of creation and outlines the different interpretations which have been postulated by interpreters, then surprisingly comes up with a (new to me) version which combines the ‘literal’ with the ‘day-age’ theories and says the days are literal 24 hours days but not consecutive and there are long periods of time between the days. Each of the six days represents a new creative act by God and he equates them with the geological ages.

He deals with the creation of man in chapter four and rejects any possibility of mankind having evolved from other animals. He is fairly quiet on the subject of evolution in general and it is not clear from this book if he accepts any element of evolution although his other books may indicate an acceptance of micro-evolution at least.  In this chapter he also deals with suffering and death in the animal world, which were present during the millions of years before the creation and fall of man. He argues that this suffering is not due to the fall of man and human sin but to a much earlier fall of angels led by Satan. He quotes C S Lewis as also supporting this view.

Chapter five deals with the message of Genesis 1 and sets out the standard Christian message which is independent of whether or not it is read literally. It is important that we don’t let the essential message of Genesis be obscured by controversies about how the days should be interpreted.

There follows five appendices starting with a look at the background to Genesis. The question of a relationship to the Babylonian epics is discussed and dismissed. This is followed by an appendix on the cosmic temple view and this is also dismissed. Appendix C is entitled, “The Beginning According to Genesis and Science” but should more accurately be, “The Beginning According to Genesis and Cosmology” because while Lennox shows clearly that the Biblical record agrees with modern cosmology in relation to the age of the earth from the ‘big bang’, he completely ignores the biological sciences. This is understandable as Lennox is a mathematically based scientist but the title is still somewhat misleading.

Appendix D deals with the two accounts of creation in Genesis and he presents a very plausible explanation for the apparent contradictions between the two accounts. He does this by showing that the first account in Genesis 1:1 to 2:4 deals with the whole cosmos including the whole earth whereas the second account in Genesis 2:5 to 3:24 deals with the events in one small area, the Garden of Eden. In the final Appendix E he deals with Theistic Evolution and the God of the Gaps approach to creation. He does not make it clear that they are very different approaches since the God of the Gaps approach is associated with the Intelligent Design movement which is rejected by Theistic Evolutionists. He argues against the philosophical explanations of prominent Theistic Evolutionists such as C S Lewis, Dennis Alexander and Francis Collins but he has nothing to say about the evidence they present for evolution in general and human evolution in particular. Regarding the accusation by Atheists that Christians put God in the gaps in scientific knowledge, he very cleverly turns the argument on its head and argues that atheistic evolutionists put ‘natural selection’ in the gaps in scientific knowledge without any firm evidence.

Lennox is highly respected in the ‘Old Earth Creationist’ circles as one who presents a concordance between science and Scripture and in this book he is clear and presents strong arguments in the area of his expertise such as the big bang, the age and size of the universe and the long geological ages but he is weak on the biological sciences and is not prepared to take his own advice (on following scientific evidence) and accept the evidence for evolution, including the evolution of man. This needs to be acknowledged by Christians if we are to get rid of the perception that we are at war with modern science and be taken seriously. Were he to accept this he could then use his very considerable intellect in the philosophical and theological debates which are ongoing among Christians who accept the evidence for evolution but still want to be true to Scripture. A way of interpreting Scripture in the light of the discovery that the earth moves around the sun was found and a way of interpreting Scripture in the light of evolution can be found.

I have given this book 3/5 for the above reasons.